October 2018 – Social justice and how to advance it was the focus of Drew Theological School’s annual Tipple-Vosburgh Lectures and Alumni Reunion.

This year Tipple-Vosburgh served to introduce the Drew Social Justice Leadership Project, led by Professor Nancy Lynne Westfield and funded by the Henry Luce Foundation. The initiative will connect students with justice leaders in the arena of public advocacy and the work of justice artists in the visual and performing arts. Tipple-Vosburgh featured many such leaders, who spoke fervently about their efforts to support a fully inclusive church, racial and gender justice and more humane public policy.

One keynote speaker, Bishop Karen Oliveto C’80, G’91,’02, said that as a student at Drew she often traveled to New York City and Washington, D.C. to participate in protests, adding that experiences like that “helped shape who I am.” As such, she urged ministers to call out injustice from the pulpit and to get outside the church to advocate for others in their communities.

“We must stand firmly in the public square and seek justice—oceans of it—fairness—rivers of it,” said Oliveto, the first openly gay bishop in the United Methodist Church. “You and I are called to create crosswalks of hope at the intersections of oppression so that love will overcome hate, life will outlast death.

Earlier, other faith leaders reflected on the challenges of tackling injustice, including a lack of awareness and diversity of political persuasions among congregants. Samuel Arroyo, for example, told the story of addressing the 2015 mass shooting at a church in Charleston, S.C. during a sermon at his congregation.

“I gave my take on it and I had people who stood up and left in the middle of what I was saying,” Arroyo said. “It’s very, very difficult, but I can also tell you … that some people did come to me and say, ‘Thank you because I was so confused.’”

Candace Simpson, program coordinator at the Concord Freedom School in Brooklyn, emphasized the importance of individual action, even as communities coordinate their efforts to achieve social justice.

“Each one of us needs to figure out what it is we do well and just do that thing,” said Simpson, who’s also a minister. “There are things that I have not done but I sleep well at night knowing that there are black kids in Brooklyn who are curious and resist.”

Panel discussions and speeches blended with meals and music, such as from Cynthia Wilson and Mark Miller, associate professor of church music. The powerful voice of Wilson, a Grammy nominated artist and minister, inspired attendees to join her in singing hymns that ranged from the “Lift Every Voice and Sing” to “Jesu, Tawa Pano” and “Pray With Your Feet.”

As in years past, the Theological School recognized alumni with a Distinguished Service Award. This year’s honorees were Oliveto, who oversees churches in five Western states, and the Rev. Dr. Jacqueline Lewis G’02,’04, senior minister at Middle Collegiate Church in Manhattan and partner in the Social Justice Leadership Project. Both were feted during a sit-down lunch at Crawford Hall.

At the start of Tipple-Vosburgh, Dean Javier Viera struck a hopeful tone, even as he bemoaned instances of violence against women and environmental destruction. He reasoned that the application of gospel values in the public square would help “heal our deeply divided nation and world” and “remake the world in ways that foster and promote an ethic of love.”

“The work of public theology,” he added, “is to help us grow into the fullness of our humanity—a humanity that is not fully realizable until all share in its fullness.”

It was a rousing beginning to three days of congregating, talking, singing and breaking bread in The Forest. 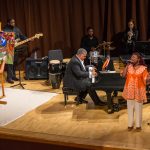 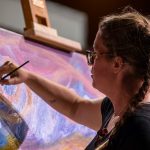 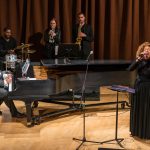 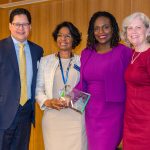 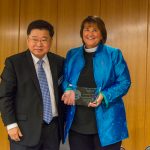 Bishop Karen Oliveto is the other honoree. 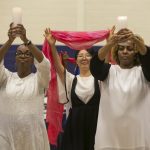 A service at Baldwin Gym 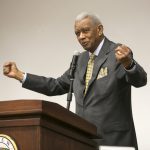 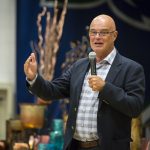 Who better to guide Drew students to do great things than Drew alumni?

Eyes on the XPRIZE

Can a $15-million global competition spark a digital revolution for children with no access to schools?

Our impact across the sciences? Hard to quantify.

A smattering of new knowledge created by Drew student researchers over the past year.

Social Justice is the focus of Theological School lectures.

A Testament to Scholarship

A flurry of fellowships supports students.

The tennis star muses on his path to med school, on-court goals and Drew communities.

The Honor Roll of Donors

Our donors’ unwavering support and unstinting generosity propel us higher. We thank you all.

News from alums of the CLA, Theological School and Caspersen School, and In Memorium.

Twice-honored state STEM scholar and human half of "Ida and Evie."