Leguizamo to #Drew18: ‘You Are the Conversation’

Leguizamo to #Drew18: ‘You Are the Conversation’

May 2018 – Actor John Leguizamo saluted the work ethic of immigrants and the inspiring activism of Generation Z in a rousing address to Drew University’s Class of 2018.

“Your Generation Z is the most politicized since the 60s. Yo, I didn’t even know what a midterm election was until this year. In my 50 years, I have never voted in a midterm election and shame on me. Shame on my generation for being asleep at the wheel,” Leguizamo said.

“You are also so lucky to have real live superheroes—like those kids in Parkland [Fla.]: Emma González, David Hogg, Anthony Borges, that beautiful black kid who shielded his Latino fellow student. They’ve taken to the streets and they’re holding our lawmakers accountable. This is your generation.”

The Tony Award winner also urged the graduates to keep learning, find a passion and “enjoy the power and freedom of your youth.”

“Sing. Dance. Box. Ask that girl out. Floss. Be kind. Eat right,” he said. “Don’t waste your time on petty jealousy or envy because sometimes you’re ahead and sometimes you’re behind. The race is long, and in the end, it’s only with yourself anyway.”

Leguizamo added that “if you take anything away from what I have been saying, I hope it’s this: never give up. You only fail when you stop trying. So, set a goal that makes you jump out of bed every single morning. And when you start seeing your worth, you’ll find it harder to stay around people who don’t.”

The actor’s address included funny anecdotes from his upbringing in Queens, with Leguizamo assuming the voices of his father and grandfather, characters from his neighborhood and mentors such as a math teacher and his first acting coach.

He also quoted poet William Blake, the writer Voltaire and founding father George Washington, as he asserted that immigrants “will always make this country great. And they will always work hard. In fact, they have to work hard—harder—just to prove themselves.”

Students from Drew’s College of Liberal Arts, Theological School and Caspersen School of Graduate Studies earned degrees at Commencement 2018, which took place on the lawn behind Mead Hall. Rain fell beforehand, but remarkably—and thankfully—ceased at the start of the ceremony.

In an annual tradition, Drew President MaryAnn Baenninger awarded honorary degrees and named the school’s teachers of the year.

Steven Gilbert and Arnold Demain earned honorary degrees for generosity and serving a unique mentorship program, respectively. Gilbert, the son of former Drew Mathematics Department Chair Norma Gilbert, funded a new mathematics professorship, and Demain is a longtime fellow in the Research Institute for Scientists Emeriti, in which undergraduates work with retired scientists on original research.

In introducing the top teachers— Laurel Kearns at the Theological School, David Thaler at Casperen and Carlos Yordán at the College of Liberal Arts—Baenninger noted that “generation after generation of Drew alumni tell stories about a professor who had a profound impact on their lives,” adding that such professors “are at the heart of this university.”

Mortillaro C’13 G’15 delivered a message of empowerment, encouraging graduates to rise above self-doubt, learn through experiences and discover what sets them apart from others—just as she did in her years since Drew.

“You will probably never feel entirely ready,” Mortillaro said. “It is likely you will never feel completely grown up, but you can’t underestimate yourself. You can’t wait. You just have to go.”

Mortillaro, who’s now a language arts teacher at Lawton C. Johnson Summit Middle School, concluded with the wish that “each and every one of your finds your own lost Rodin. I hope it consumes you and motivates you, frustrates you and tests you. I hope it inspires you, changes you and most importantly, lets the greatness inside of you shine—the greatness that has always been there.”

It was an inspiring moment on a momentous day. Here’s a closer look at the ceremony. 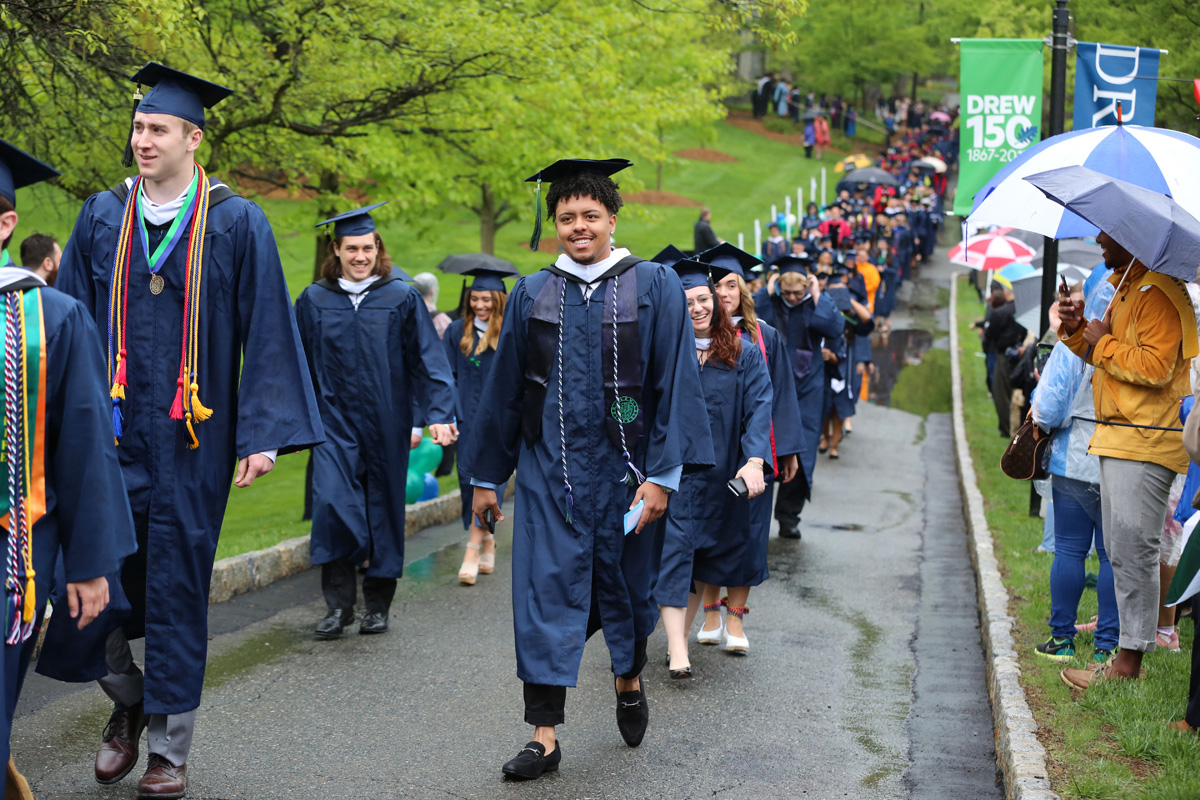 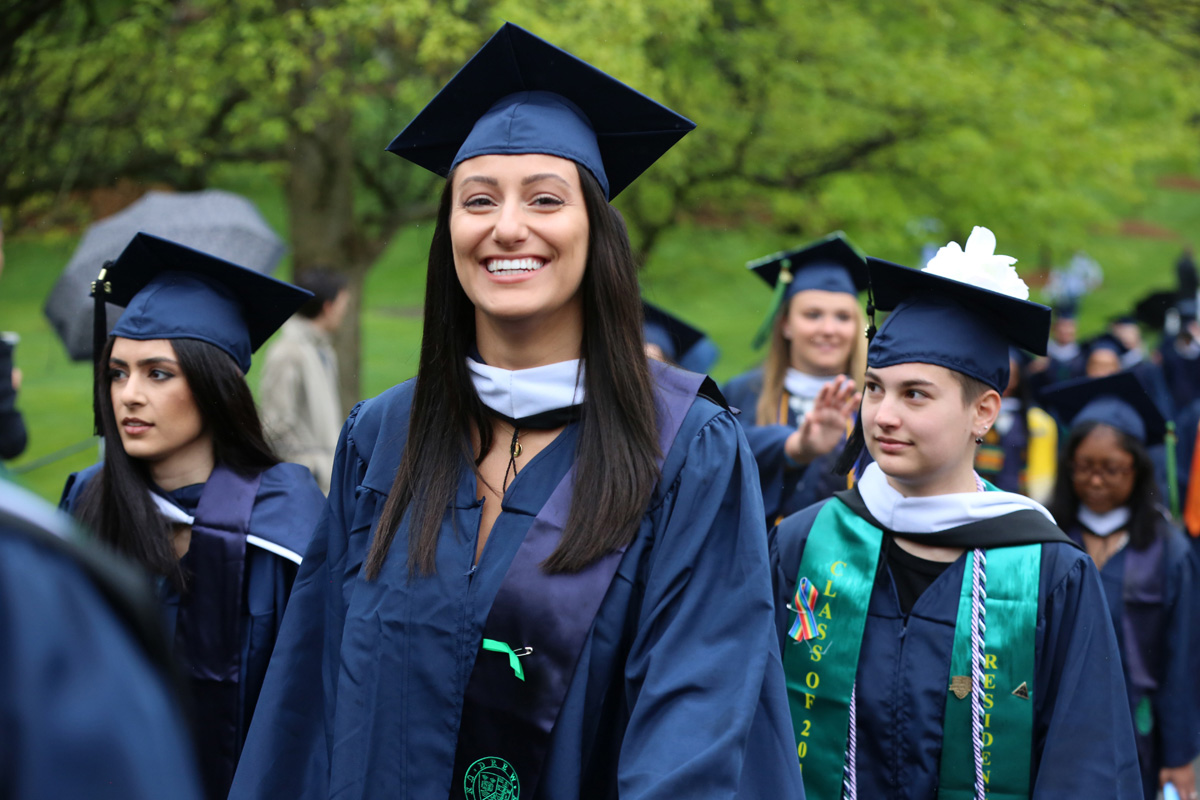 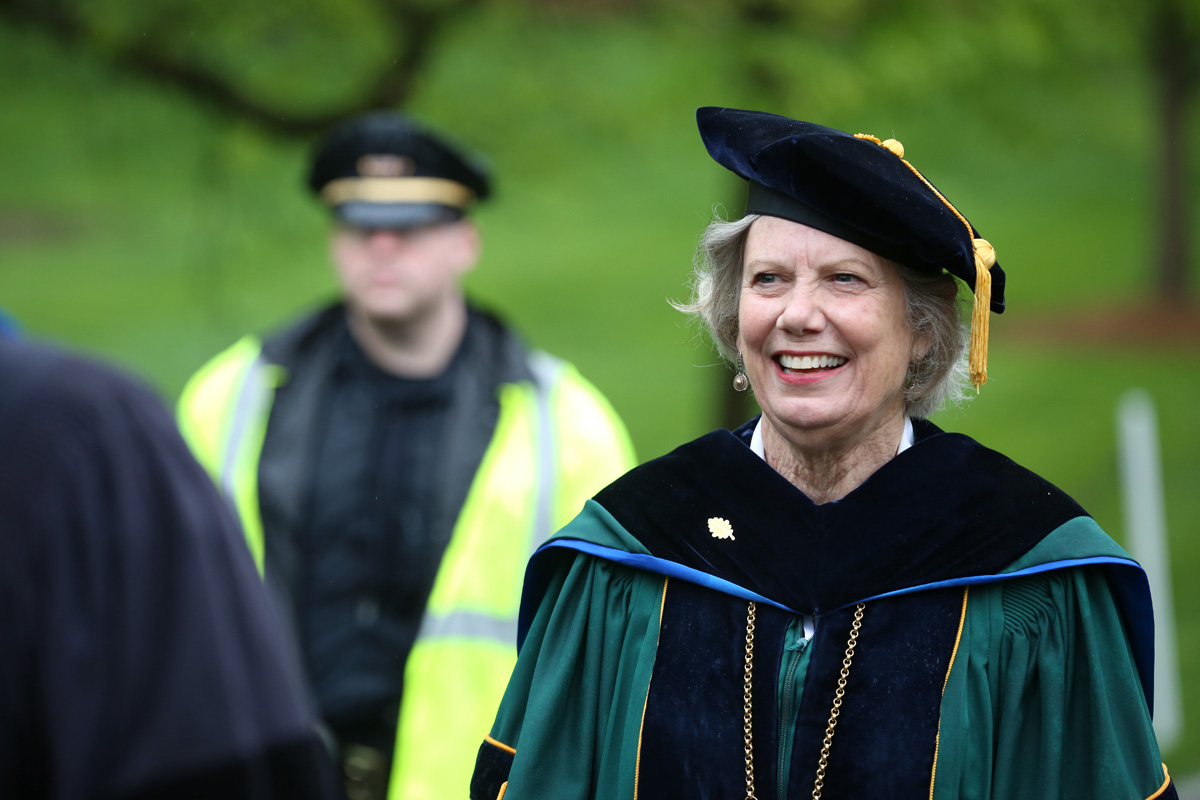 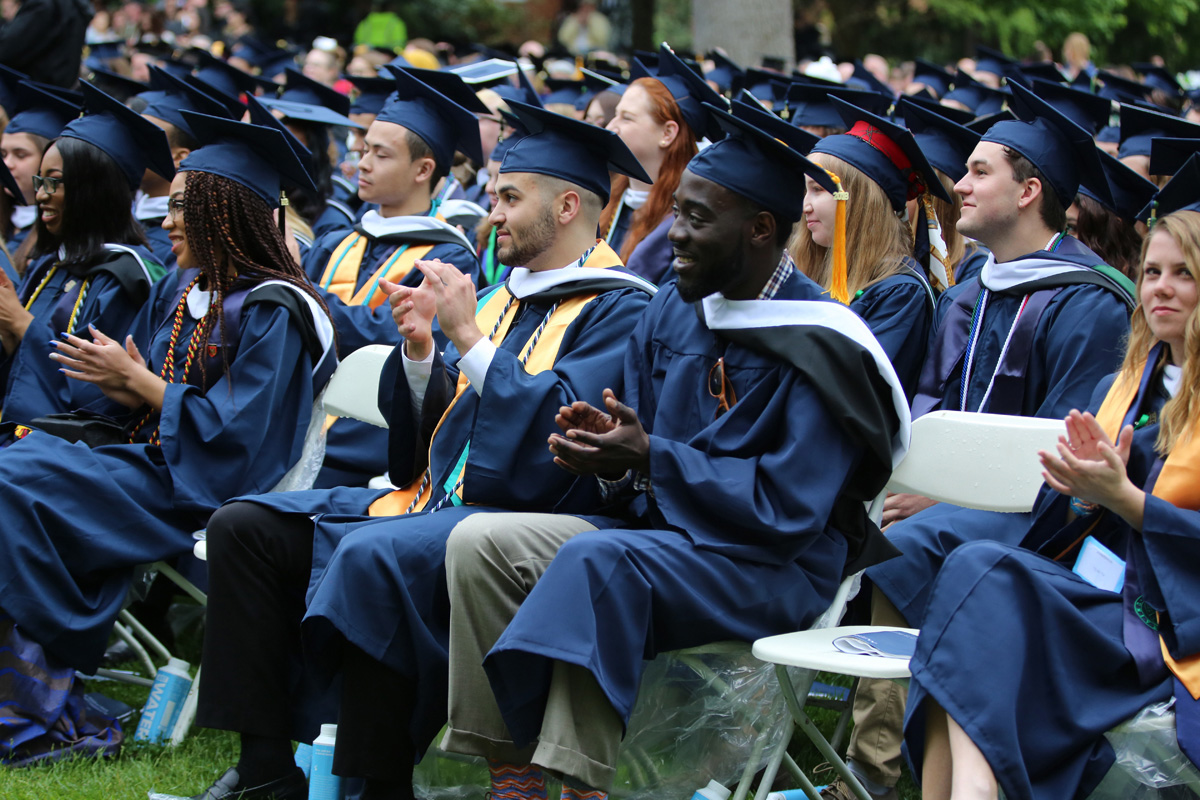 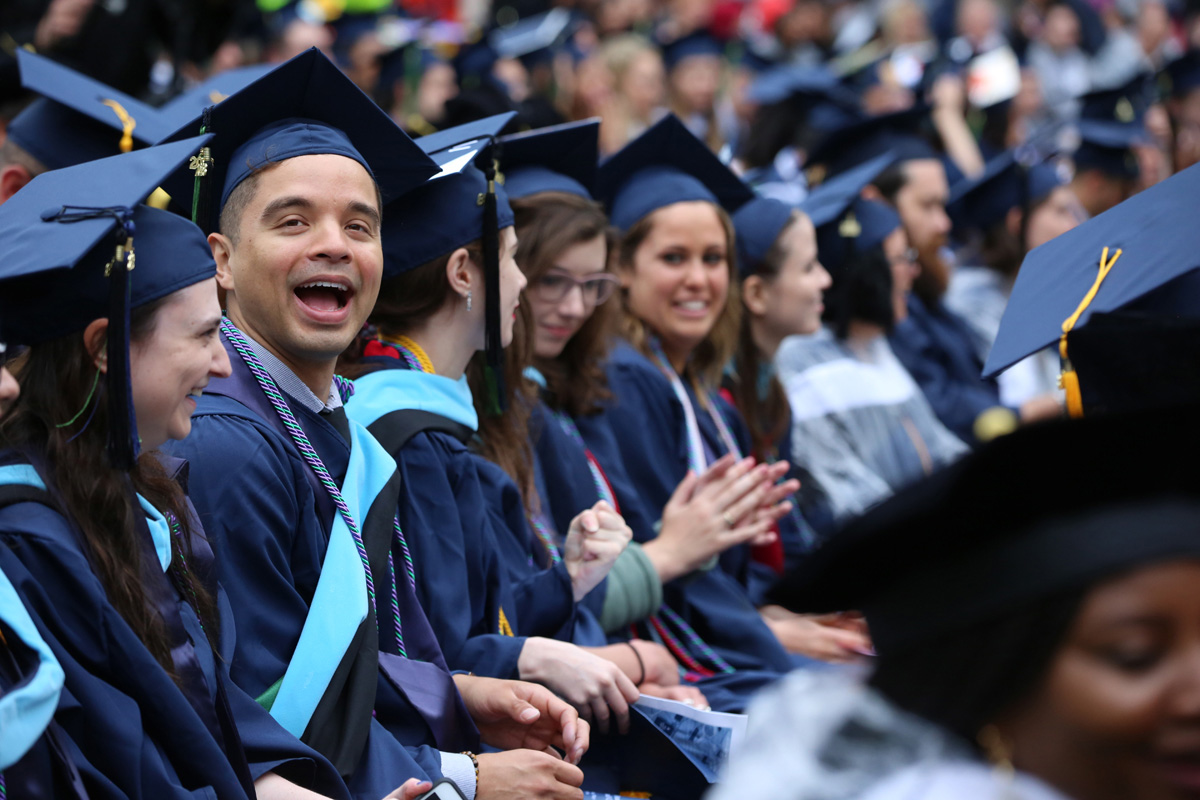 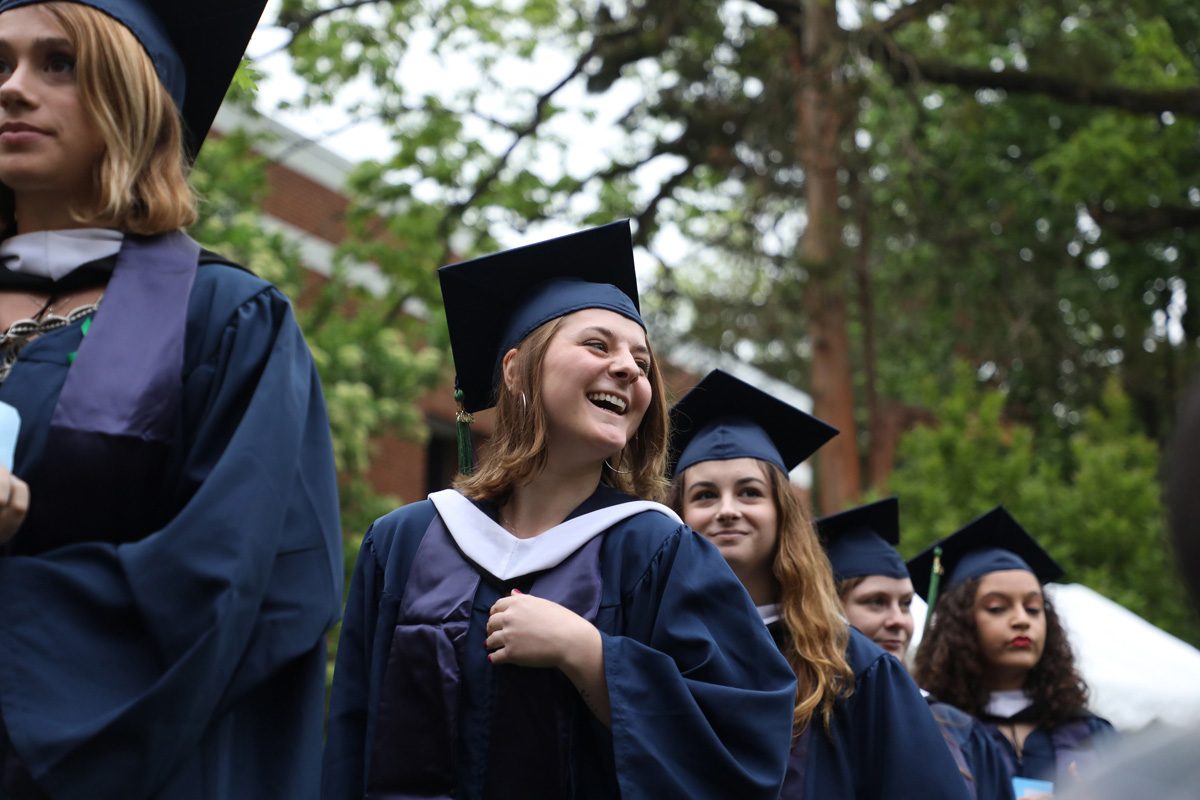 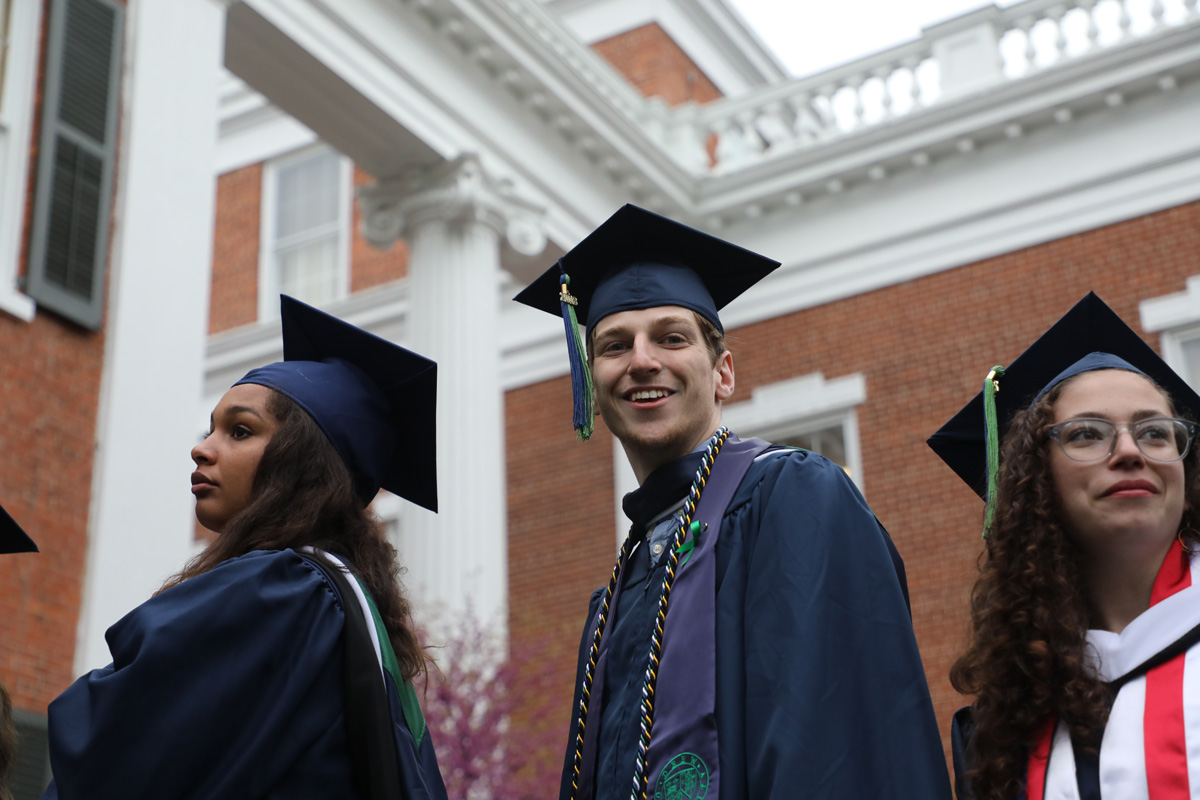 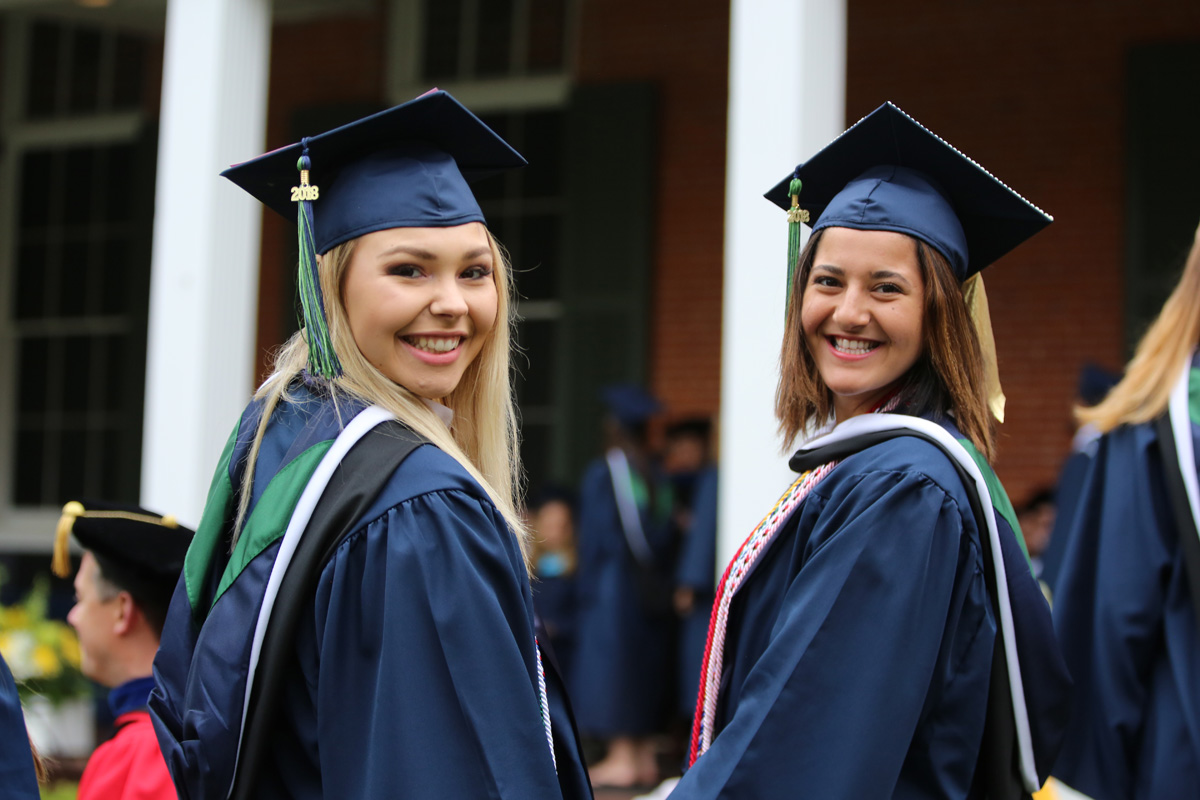 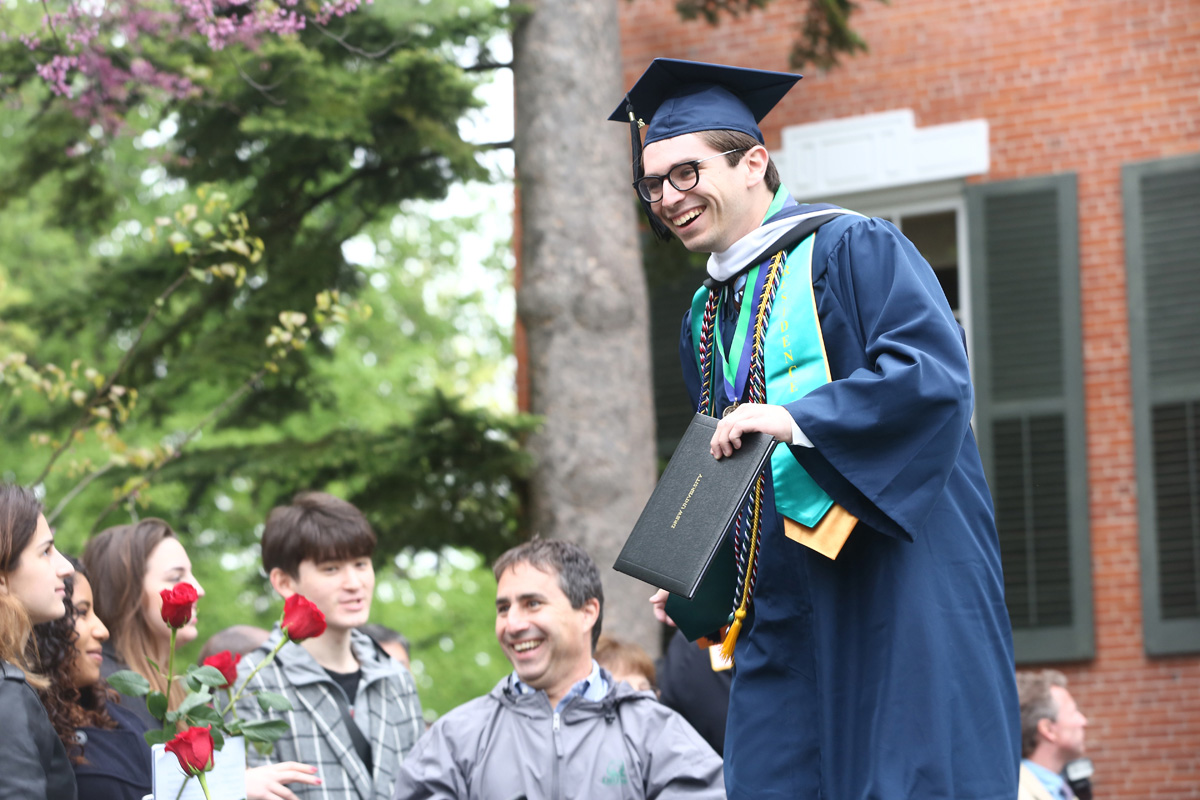 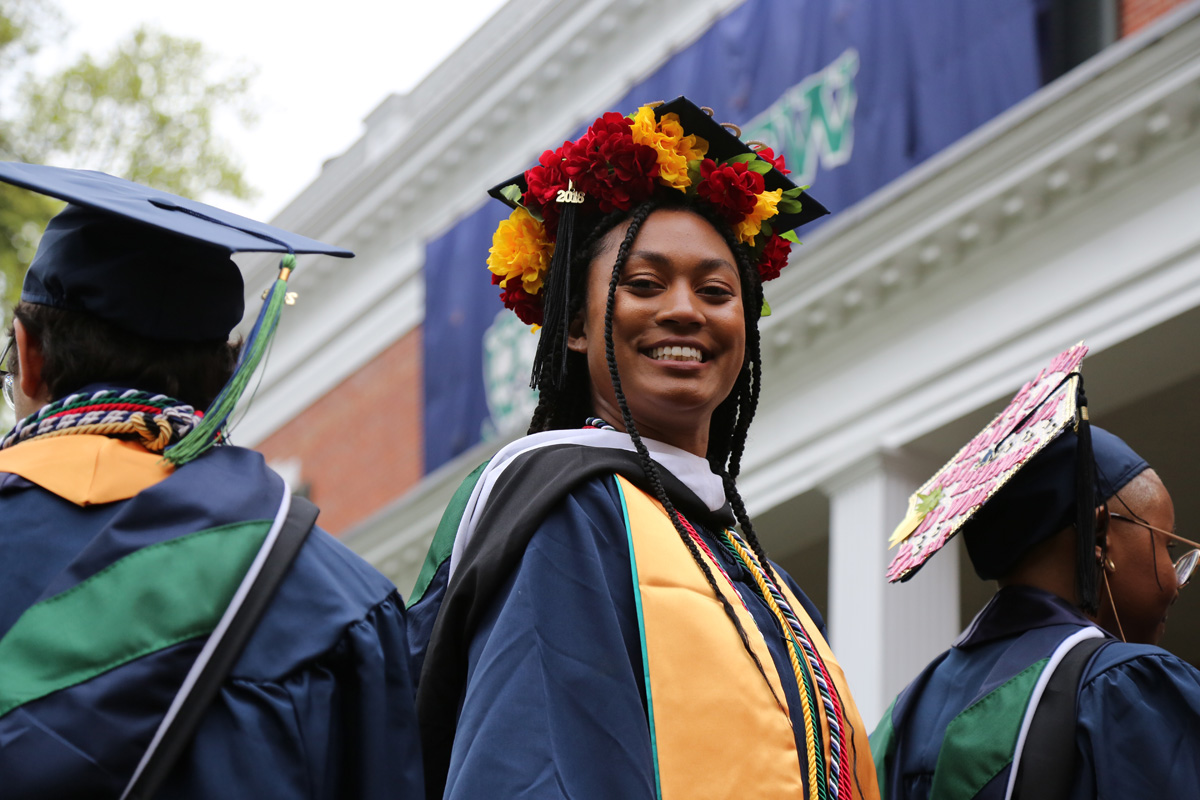 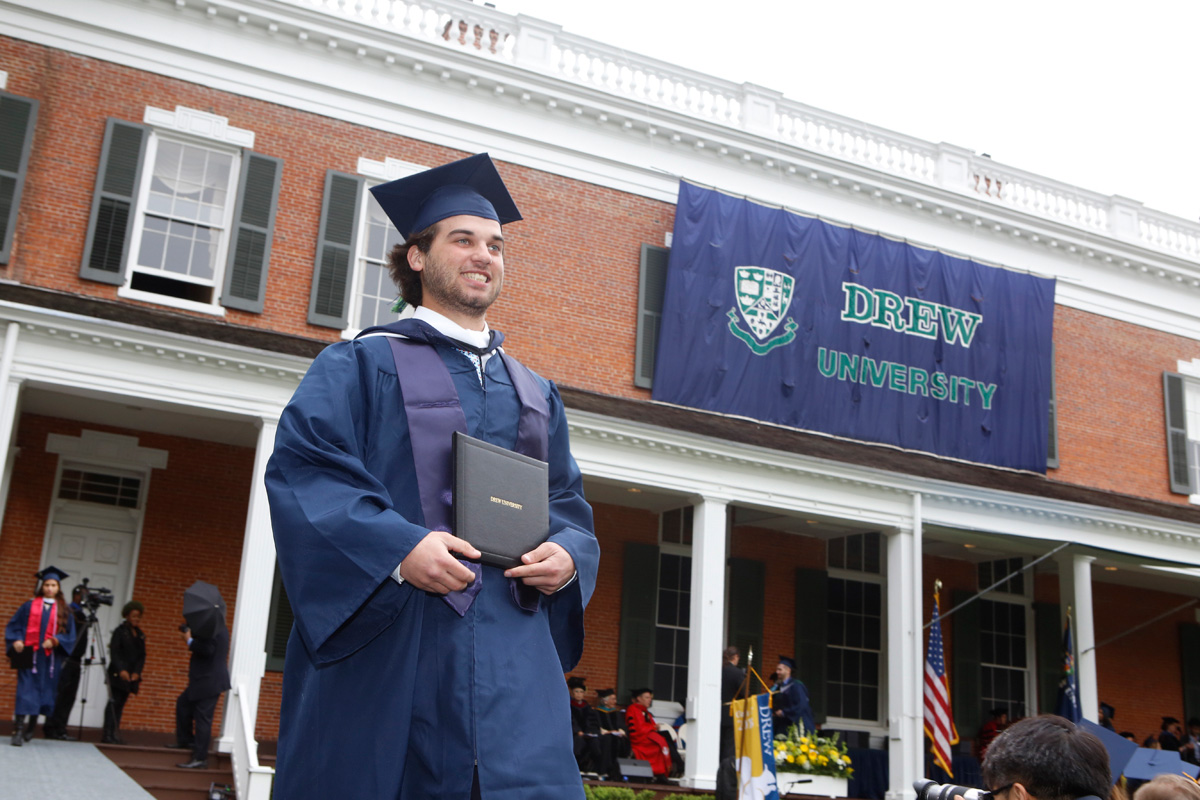 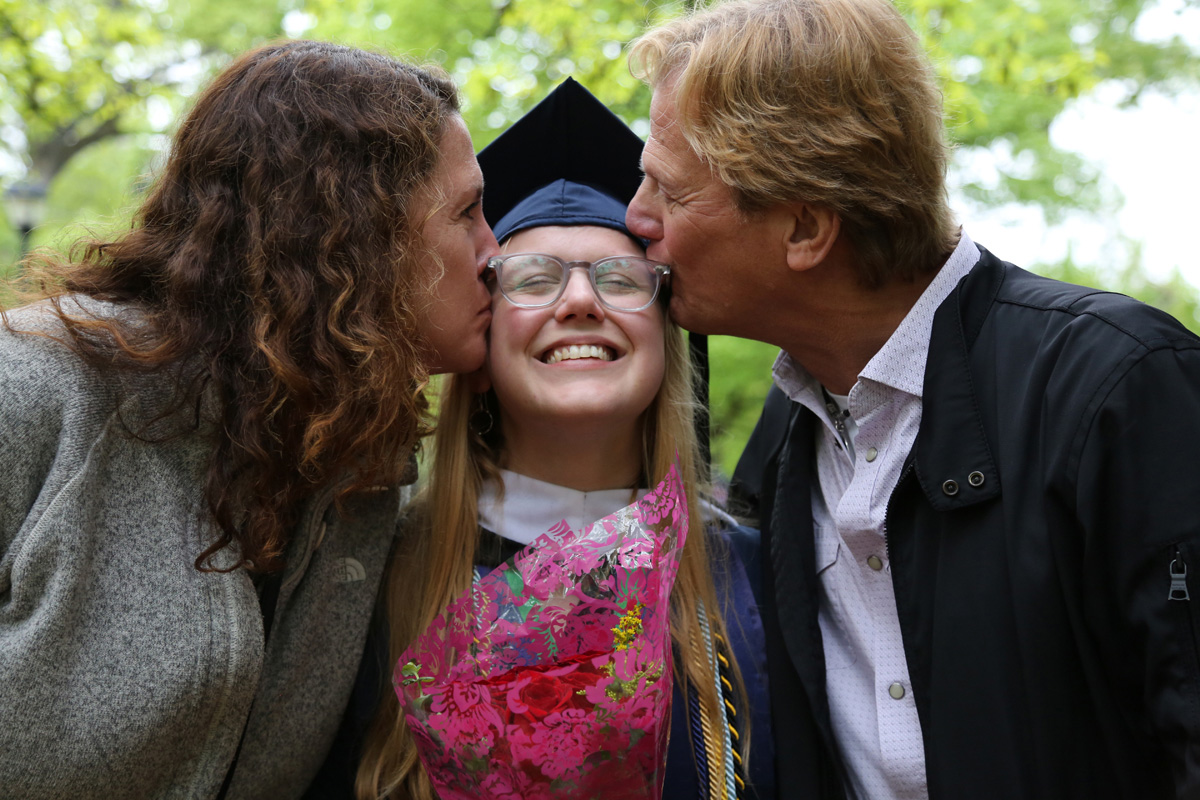