After nearly 20 years of teaching at Drew University, that’s what Rodney Gilbert left with his theatre students. So, out those words flowed during an emotional tribute on campus for the beloved professor who died in November.

Andrew Binger, a 2013 graduate, recalled how Gilbert addressed a handful of actors that he cast for his production of August Wilson’s King Hedley II in 2015. Binger, who played Stool Pigeon, was among them.

“He told all four of us that we are kings. A black man told four men of color that they’re kings. And I swear to you I never forgot that,” said Binger, his voice cracking with emotion. “That changed my life. I walked through the rest of my days since then, my head held high, thinking that I was a king. When you think you’re a king, there is absolutely nothing that you can’t accomplish.”

Gilbert was also compassionate toward colleagues. Assistant Professor Kimani Fowlin described him as an “instant brother” who was supportive of both her and her son.

“Rodney was and is unapologetically fabulous,” said Fowlin, who teaches dance. “And when you would see him, he would always make me smile and feel proud that this black man was doing it with style, grace, passion and attitude.”

To senior Alcides Costa, Gilbert was a natural community builder who understood students individually, often just through eye contact and a few words, such as, “How you doing, son?”

“I never felt at place in this world until I met Rodney,” Costa said. “I never felt like I actually had a family until he brought together my chosen family here at Drew. And that’s all out of love because he was a man on a mission and he knew what he had to do.”

Costa, Fowlin and Binger were among a dozen speakers at the tribute, held at the Thomas H. Kean Black Box Theatre. Others included fellow professors, school administrators and colleagues from Yendor Arts, the Newark-based community arts organization that Gilbert founded. The event blended heartfelt testimonials with student and alumni performances of scenes from plays such as A Raisin in the Sun, King Hedley II and New World Disorder.

The dynamic memorial ended with Najah Johnson C’16 singing the Gospel hymn, “His Eye Is on the Sparrow.”

Johnson broke down briefly after a just few lines, as her emotions bubbled to the surface. But cheers from the crowd enabled her to go on and she closed exuberantly with, “His eye is on the sparrow, and I know he watches me.” 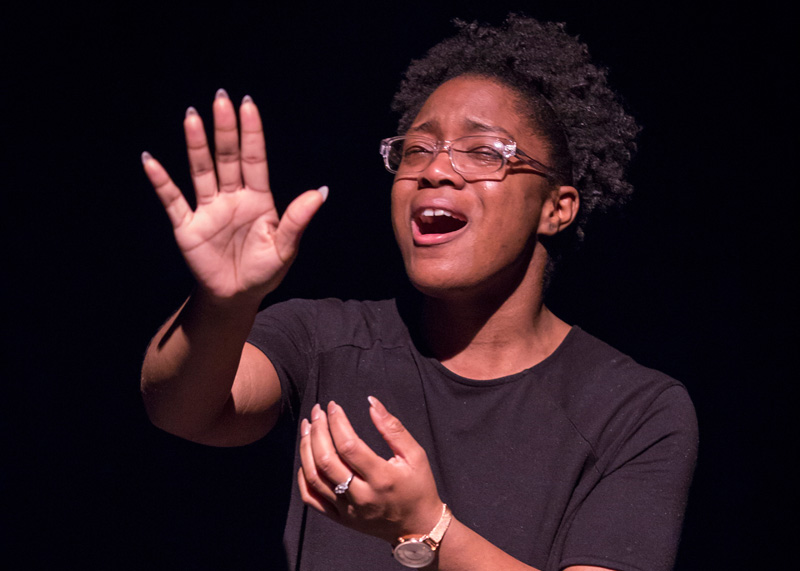