Getting Around The Forest

View/download a PDF map of campus.

Take in the beauty of Drew's 186-acre campus—called The Forest—with our 360-degree tour.

As we continue to work hard to provide an engaging and safe community we ask that all individuals coming to campus complete a health questionnaire prior to their arrival.

Questionnaire on LiveSafe App or Web

By train from NYC

From Penn Station (at 34th Street and 7th Avenue) take a New Jersey Transit train on the Morris-Essex line. On a train headed to Dover, get off at the Madison stop. Follow the directions from the train station to the Drew campus as noted below. For more information, visit the NJ Transit Train Schedule, or contact them directly:

From the Madison Train Station to the Drew Campus

Use the stairs in the middle of the platform. Through the passage on your right, cross beneath the station. Go right on Kings Road for two and a half blocks where it joins Madison Avenue. Follow the sidewalk up Madison Avenue past Grace Episcopal Church and Madison Methodist Church (on left). The campus is on your left. There are three entrances to campus. Walk to the second entrance through the arched gateway. Directly ahead of you will be Mead Hall, a large brick building with white columns. To the right is a smaller brick house with a white wrap-around porch. This is Wesley House where the Office of College Admissions is located.

By car from various locations

From Interstate 287, take exit 35. At the end of the exit ramp, follow signs for Route 124 east (Madison Avenue). Travel three miles and turn right at the Lancaster Road traffic light onto the Drew University campus.

From Eastern New Jersey and New York City (Lincoln and Holland Tunnels) via NJ Turnpike (Interstate 95 south), take exit 14. After the toll plaza, follow Interstate 78 west to exit 48 (Route 24 west, Springfield/Morristown), and then to exit 7A. Follow signs for Route 124 West/Chatham. Continue through Chatham and Madison (Main Street). Drive through downtown Madison and bear left under the railroad trestle to the second traffic light, at Lancaster Road. Turn left onto the Drew University campus.

By bus from NYC and Summit, NJ

There is no direct bus service from New York City to Madison. However, you can take a Lakeland Bus from the Port Authority Terminal (at 8th avenue and 42nd Street) to Summit, NJ, and then take a NJ Transit train (Dover line) to Madison which is about 15 minutes from Summit. Follow directions above from train station to campus. For more information, please contact the Port Authority Bus Station or call 212-564-8484.

There is also a bus line that provides service nearby campus to Morristown or to the Livingston Mall for shopping.

For overnight accommodations, we recommend the following hotels conveniently located near Drew’s campus.

Just up the street from Drew’s beautiful, wooded campus is our hometown of Madison, where you’ll find Food Channel–famous cafés, cute shops and a music scene. Madison is ranked among the safest cities in America.

Below are some favorite Madison eateries. 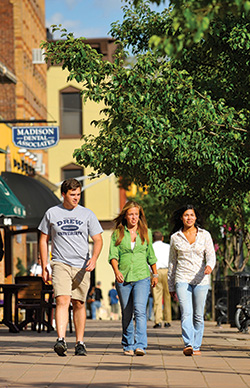